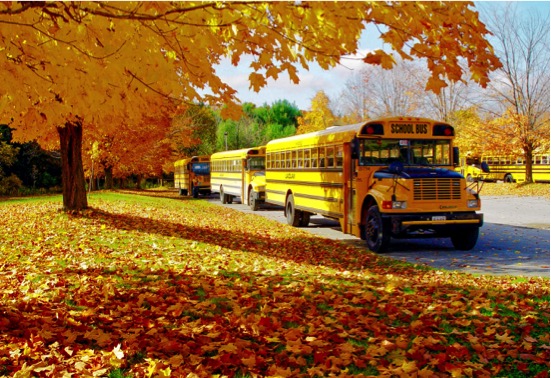 School’s in session, buses are rolling, and leaves are changing

Even though temperatures were still in the 90s when schools across North Carolina opened their doors to students in mid-August, it still seemed to mark the end of summer, even though the official transition from summer to fall doesn’t occur until September 22 at the Autumnal Equinox. Excitement fills the corridors whether it’s at the primary, secondary or higher education level. I always feel like the “new year” begins now and am energized with great expectations of this new beginning. Fall is truly one of North Carolina’s best seasons!

Have you ever wondered about the origins of items that fill the backpacks of boys and girls heading back to school, such as pencils, magic markers, and glue sticks? I learned the following information from a short article in the September issue of Real Simple magazine based on James Ward’s book The Perfection of the Paper Clip. The bright yellow pencil we all know from our school days is filled with graphite discovered in England in the 1500s when a storm blew down a tree exposing the shiny substance. Prior to the invention of the rubber eraser in the 1840s, bread was used to remove pencil marks. Magic markers were invented in 1952. And the inspiration for the glue stick occurred in the 1960s when a German chemist observed a woman applying lipstick on board an airplane!

Education has always been important in our state. North Carolinians are proud of the fact that the University of North Carolina at Chapel Hill is the oldest public university in the country. It was chartered by the North Carolina General Assembly on December 11, 1789. Perhaps a lesser known fact is the history of the buses that transport children to schools across the entire United States. Thomas Bus Company, located in High Point, produced its first school bus in 1936 and is the leading North American manufacturer of school buses!

History and the influence of the rivers, sounds, and ocean merge in visit NC concierge’s trip to the Inner Banks’ communities of New Bern, Bath, and Washington October 25-26. There is still space available for this fall adventure. Call now to reserve your place.