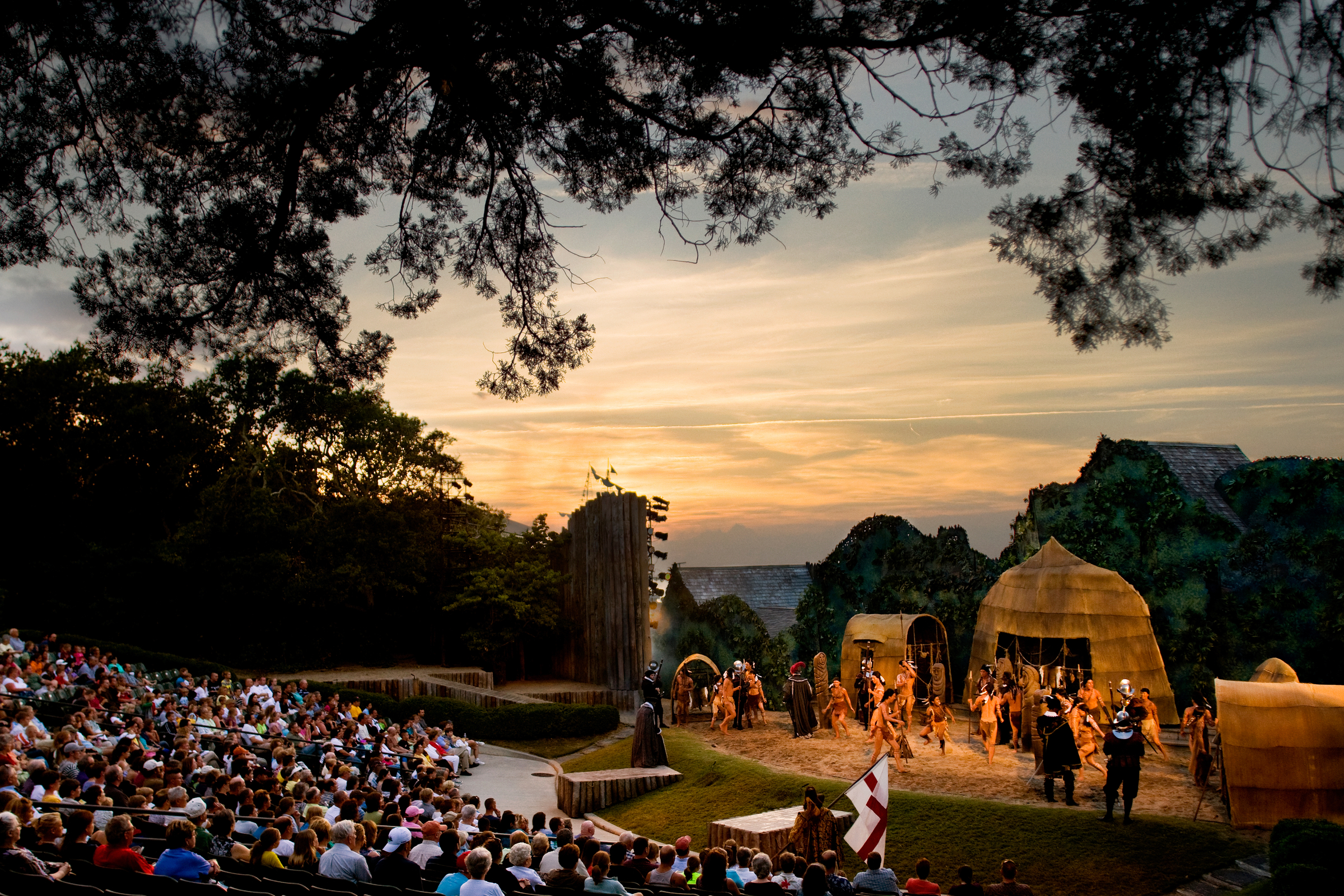 North Carolina is recognized for its role in a unique style of historic theatre arts.

Recollections of my early family vacations in June to Nags Head where we stayed in my great aunt’s white clapboard cottage are fond memories. My cousins always joined us for a week of fun in the sun and ocean. As our family grew we stayed in a motel, and I remember my dad taking me to The Lost Colony when I was about ten years old.

Perhaps North Carolina’s most famous outdoor drama, The Lost Colony, has been performed annually (except during World War II) on Roanoke Island since 1937. Written by Harnett County native and Pulitzer Prize winning playwright Paul Green, the play tells the story of the first English settlement in North America on Roanoke Island, along North Carolina’s Outer Banks. Paul Green had been a student of Professor Fredrick Koch who arrived in Chapel Hill in 1918 to teach the University’s playwriting courses. Professor Koch encouraged his students to write about what they knew best – their hometowns, the stories and legends they had come to know passed down through the generations.  These “folk plays” Koch defined as being based on “the legends, superstitions, customs, environmental differences, and the vernacular of the common people.”  From these roots “the birthplace of American outdoor drama” was born in North Carolina.

The Lost Colony was intended to be performed during the summer of 1937, celebrating the 350th anniversary of the arrival of English colonists, who had been engaged by Sir Walter Raleigh with Queen Elizabeth’s blessing to settle in the New World. The Lost Colony has been performed every summer since, with the exception of the World War II years. It gave birth to a movement in our state that has become not only a vehicle to tell a local story, but also an economic driver in communities across the state. There are close to a dozen outdoor dramas playing this summer in North Carolina. The Lost Colony, Unto These Hills, and Horn in the West are the most well known.

Playwright Kermit Hunter wrote both Unto These Hills and Horn in the West in the late 1940s while a graduate student at the University of North Carolina at Chapel Hill. Unto These Hills tells the story of the Cherokee Nation from their first encounter with Europeans on Hernando De Soto’s expedition in 1540 through the forced removal to Oklahoma Territory in the late 1830s. Horn in the West, the country’s oldest Revolutionary War drama, is the story of westward migration lead by frontiersman Daniel Boone.

As I reflect on that summer evening with my dad in the late 1950s I wonder if seeing The Lost Colony was the beginning of my love affair with my home state. Certainly it was heartwarming to sit in that same amphitheater with my own children 25 years later to share an evening of entertainment and education with them. And, on a trip to the Outer Banks in 2000, it was a joy to spend another evening sharing this part of our state’s history and culture with my new husband who hails from Minnesota. On subsequent visits to the High Country (Boone – home of Horn in the West) and Cherokee (home of Unto These Hills) I’ve enjoyed refreshing my own knowledge and sharing these important North Carolina history lessons with my family.

We all get the urge to hit the road, both literally and figuratively, in the summer. With expectations of leisurely exploring sites, savoring fresh summer fruits and vegetables, feeling warm breezes along the coast, experiencing cool mountain evenings, North Carolina has it all. Check out the many outdoor dramas performed this summer across the state, and plan to be entertained and educated in a uniquely Tar Heel way. When you return, drop us a line! We’d love to hear about your adventures.